Crash Bandicoot,sony's first mascot,was one of the most popular exclusives created by Naughty Dog back in the PS one era.After the ps one glorious years the franchise moved to various different publishers,but everyone failed to replicate it's success.Activision held the rights for the crash bandicoot licence in the last couple of years but... 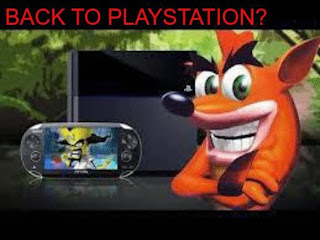 There are many rumors around the net about a possible Playstation return after Activision disappeared him from the website and content.The company's answer about whether it still holds the rights of the franchise is:"No comment".
A new Crash title appeared on Amazon France,known for listing games earlier than their official announcements.The game is supposed to be a PS4 exclusive and published by Sony.Further evidence suggesting Sony intends to reboot the franchise on PS4 is the recent tv trailer.In it a silhouette of Crash with an arrow pointing away from a bin and towards a yellow diamond sign that looks a lot like the SCE logo.Look at the pictures below.

But don't get your hopes up because Sony denied the rumors and said that Activision still owns the franchise,so people should ask them about bandicoot's possible return,was the tweet from Adam Boyes replying to a question about the IP.Confussion of course but it would be great for Crash to return in it's roots.A Naughty Dog reboot will change the franchise's fate once again.