Playstation 4,sony's next gen console,has sold over a one million units in it's NA launch.Shuhei Yoshida,the president of sony's worldwide studios,made the announcement via his twitter account. 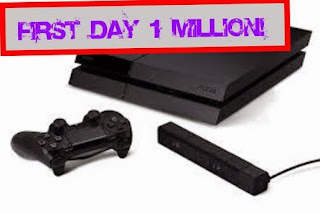 The number is impressive and places a new record for Sony,as the fastest selling playstation system yet.Sony's target sales of 5millions units sold by Mrch 2014 is very realistic and the NA launch proves it.PS4 launches across PAL territories  at November 29 and early 2014(February 22)in Japan.Personally i think that Playstation 4 will sell a lot more than 5 million by then.
at Sunday, November 17, 2013