Freedom Wars,the highly anticipated first party exclusive from Japan Studio released last week in Japan (26th June) and  has sold about 188.888 copies so far(digital copies not included).Sony hoped that the game would sell 1 million copies and would be a system seller but the hardware numbers are not that great as the PS Vita sold 22.192 this week,giving the system a 10000 unit boost from last week's numbers. 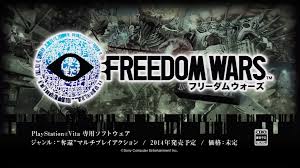