PS Vita owners want to bring GTA on the handheld(petition)

Grand Theft Auto,one of the best selling franchise,is a game that PS Vita's library is missing so much.Yesterday,Rockstar games announced that a remastered version of Grand Theft Auto:San Andreas is coming for the mobile devices this December.No surprise that a vita version wasn't on the list. 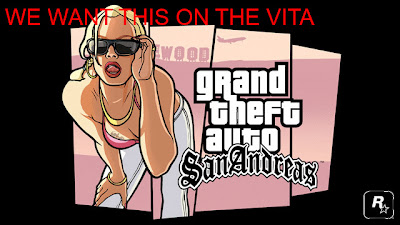 Rockstar games released two PSP GTA titles and both were among the top selling games for sony's previous handheld.A GTA:SA port is something that PS Vita can easily handle.Maybe a GTA PS2 remastered collection  for the PS Vita would fit nice.I know it won't be a system seller,because of the games age,but it would have been a nice start for the franchise on the PS Vita.
PS Vita owners want to bring the franchise to the handheld,there is a petition for the GTA:SA port here:https://www.change.org/petitions/rockstar-games-port-grand-theft-auto-san-andreas-to-the-playstation-vita and a tweet to rockstar and sony here:https://twitter.com/blackryn0/status/405407470459572224.Come on Vita fans,let's try to get a GTA game!
at Wednesday, November 27, 2013