Sony Computer Entertainment just announced that PS4 has sold through more than 7.0 million units globally as of April 6th, 2014.PS4 software sales are great too with more than 20.5 million copies sold at retail and PlayStation Store worldwide as of April 13th, 2014. 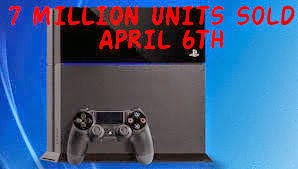 Sony's  target sales was 5 million units by March a number that was easily surpassed.Let's take a look at the official numbers announced by Sony and all the phenomenal sales that PS4 achieved: