According to vgchartz,PS Vita has sold over 8 million units worldwide.In 2014 Sony's handheld has sold about  million 1 units so far. 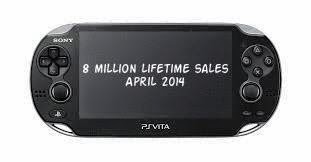 Most of its sales came from its native country Japan,but things aren't so good for Sony in the western markets especially in NA.PS Vita sold the shocking number of 10000units only last month in North America.Hope the Borderlands 2 PS Vita Slim bundle will boost sales in NA but Sony should announce some western AAA releases as soon as possible(E3 is a good change)
at Sunday, April 20, 2014