Remote play is a PS4 feature that allows it's video and audio output to be transmitted on the PS Vita screen.Essentially gives you the ability to play PS4 games in the palm of your hands.Sony made it a mandatory feature for all the Playstation 4 games,except for games that require peripherical,such as the ps4 camera or playstation move. 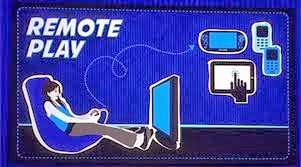 PS3-PSP-PS Vita remote play is something that everyone wants to forget.The feature was not well executed and supported only a few games.But Sony seems to have done it right this time...So is it fully functional?Does it work outside of my home via wifi?Some of the questions many fans had before the PS4 launch. 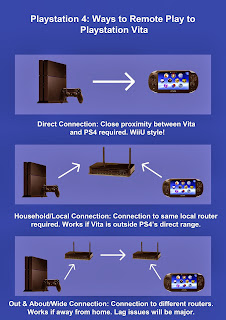 1.Direct connection requires the proximity between the two systems and doesn't need an internet connection to work.Works very smoothly so far.Proof below...

2.Local connection requires a wifi connection and the two consoles to be connected on the same router.Preferably the PS4 is connected via an ethernet cable and PS Vita is close to the proximity of the wifi access point.Works great watch the video below

3.Wide connect when the two systems are connected on different routers so you can enjoy ps4 games outside of your home.Works surprisignily well even with not so fast internet connections


4.Sony clearly expressed that the the remote play is not supported via 3g.But a youtube user called the Phanx made a test of 3G remote play and the results are quite good.

From what i have seen the remote play feature works great,better than everyone expected.Next gen really is in the palms of your hands!
at Saturday, November 16, 2013